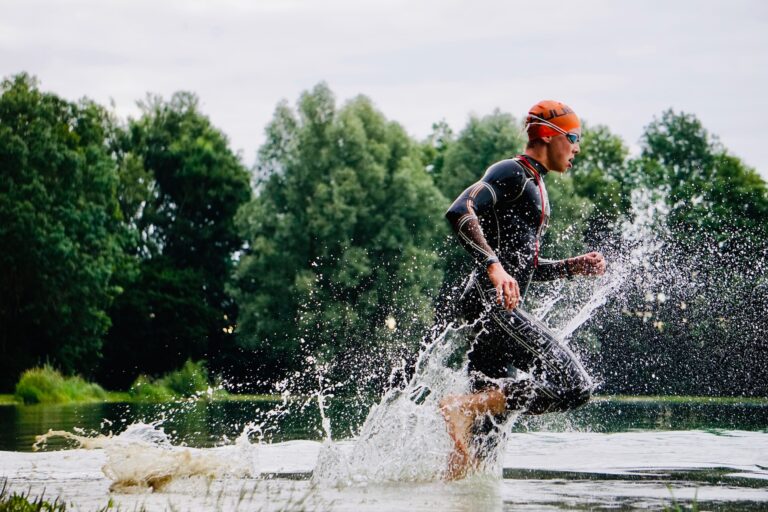 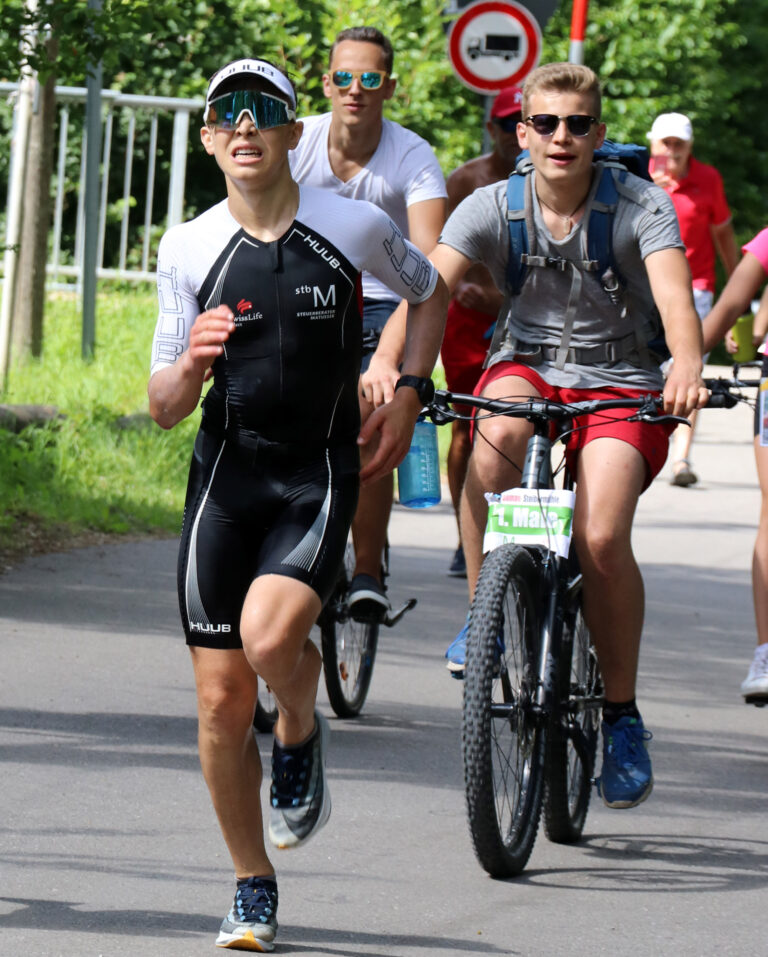 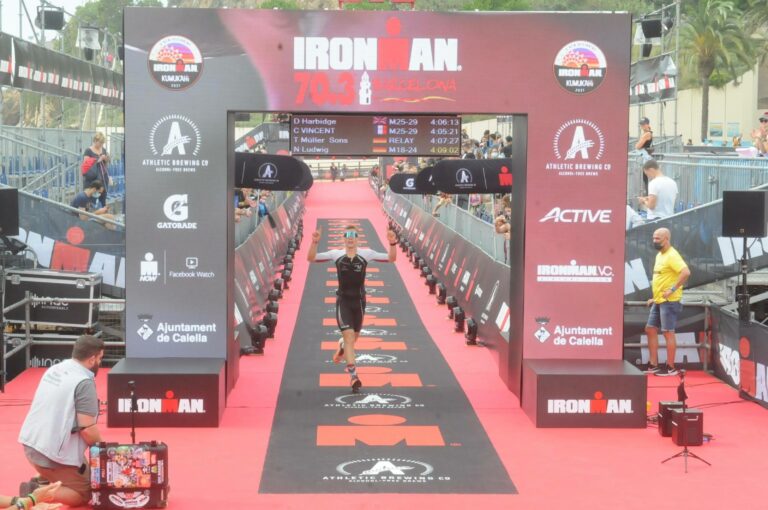 Half marathon Kallmünz
I started my season with a half marathon in Kallmünz. Against my expectation, the course was pretty flat and fast. I managed to run the course in a time of 1:39:06 and won my Age group with this time. Unfortunately, I was dehydrated heavily, which meant that I wasn´t able to run the second half strong.

Priorität: A
Zeit: 1:39:06
Datum: 06.04.2019
Startzeit: 14:00 Uhr
Disziplin: Lauf
Distanz: 21,15 km
Ort: Kallmünz
Höhenunterschied: 30 m
Webseite des Eventorganisators: https://www.atsv-kallmuenz.de/triathlon/fruehlingslauf/
Sprint triathlon Oberschleißheim
It was the time to do my first ever triathlon in May this year. I went there with no expectations at all and managed to get third in my age group and 18th out of 34. The race went amazing and I was able to be quite consistent overall. I think I could have gone a bit harder on the bike and on the swim without damaging my run performance very much. I did this race without aero bars on my road bike, because I haven´t ridden with them since November last year, but I decided to put them back on again and I will do the next one with a pair of aero bars. The course was a little bit too short so I came in just below one hour. Additionally, I was very happy with my transitions in which I performed very well.

Disziplin: Triathlon
Distanz: 0,4 / 20 / 5
Ort: Erding
Webseite des Event-Organisators: http://www.stadttriathlon-erding.de/stadttriathlon/index.php
Sprint triathlon Hof (Team)
Today I did my first triathlon in the „Bayernliga“ and was able to finish 21st. Our team „Tsv Jahn Freising“ was only able to get second last as we were only three people because the best biker out of our club wasn´t able to start due to an illness.
The format today was „slipstream allowed“, just as in Wts.
My day started off pretty good with a strong swim, so I was 14th out of the water.
I started the bike with the guy, who won the race later and he tried to close the gap to the first group. The pace was very high and I didn´t feel like doing the work. A few kilometers in he told me we could get the front group if we worked together. I roasted myself a little too much, but he was able to jump on the wheels in the first group. So I had to wait for the next group because I just couldn´t get on, especially because a lot of descends followed in which the advantage off being in a group is just enormous. I jumped on their wheels and we rode together quite strong.
After a while, I did some work in the front and a few seconds after I dropped back a little bit into the slipstream, I drove into a wheel of a rider in front after he braked slightly. I drove off the road into a guardrail and brushed against it for what felt like an eternity. I was able to get back onto the street and luckily didn´t crash another rider while doing so. During that, I clipped out of my paddles and my bike felt like, I had a flat. I knew, had to finish because we needed the points just to have the chance off averting our decadence as we missed the first race of the season. I was so sure the tire was flat and I didn´t have a spare with me. I didn´t want to walk the whole way. I recognized the tire was still full and I was so happy and instantly tried to get back to the group, but they were just to fast.
I had to wait for the next group again. Coming into T-2 this group split up and I was barely able to stay in the front pack. Probably I should have saved more energy for the run.
I started the run with very heavy legs but was able to catch a few guys quickly. After about one kilometer three fast guys overtook me and then I just finished the race. The people in front were too fast and I was able to stay in front of the people behind.
I´m not particularly happy with my result, especially because of the close crash and the fact that I could have been far further upfront if I worked together better with the winner today and not lost the group yet again. I´d have been likely to finish seven positions better, which would have meant our club would have been 12th and not 14th. Shit happens! Luckily I didn´t crash and got injured badly. I´m looking forward to the „Hirschbachschleiferl“ next week and hope to perform better there.

This was tough. Exhausted, but very happy I reached the finish line of our local 9,7-kilometer run in second place yesterday. I was able to run that distance in 36:39, another 21 seconds faster than I thought I could if I had a perfect race.

Even though the race is very small with only 140 allies, the race is stacked with good runners, nine people reached the line in less than 40 minutes in fact.
We started off with a pack of six runners, which gained time on the others quickly. Two runners dropped out of the group in the first few kilometers. After about 4 kilometers, even Dirk, who later won the race, didn´t want to run our pace anymore. Only my two club mates, Jörg, who has a personal record of 35:xx on that exact course and Nik, who wanted to win the race this year, led the race. Nik was able to get about a 10-meter advantage over Jörg, who was another 10-meters in front of me by the incline after 5 kilometers. During that incline, he started to have breathing issues, as well as that he started to feel bad, so Jörg and I closed the gap and overtook him eventually. Slowly, but surely I managed to close the gap to Jörg and I decided to sit in right at his heels for some time. Sit in, is relative as we ran a 3:40ish pace. With about two kilometers to go, Dirk managed to come back and overtook fairly quickly as he ran something like a 3:30 pace, which neither of us even dreamed of doing at that moment. Nobody was close behind so it was a battle, who got second, with less than two kilometers to go. Using all my might I overtook Jörg, but I was just not able to run faster than him and he closed the gap again. I just couldn´t run faster, but I was able to dash away. Still, he was just faster and he closed it again. Speeding up was impossible, I just didn´t have the power anymore, but another dash was possible and with more moves like this, my lead was defended coming into the village and the last 500 meters, the last 400, the last 300. I thought I had it, if I continued to give it everything I had. Somehow he was able to sprint right next to me, but this was the exact motivation I needed, to sprint for the line.
36:39 – a new record for me as well as the whole population from Kirchdorf!

The main goal of that day was to stay in the „Bayernliga“, as we had to really bad races this season out of four in total. One, of which, was a DNS and the other one was a DNS by our best teammate! We achieved this by working together really well on the bike after a swim, in which one of our teammates got hit badly, so we had to wait for some time because we decided to race together as only the third finisher of our team counted into the end result! We followed it up with a solid run and like this, we achieved our goal!

Sprint triathlon 3muc Oberschleißheim
Today I did my last official triathlon of the season, the 3 Muc Triathlon Oberschleißheim. After a solid race, I was able to get my first ever overall podium in a time of 54:27!
The decision, if you want to swim in a wetsuit for a 400-meter swim is quite difficult, as a lot more than the saving you make during the swim can be lost in a bad transition! I still decided to go for a wetsuit and was able to swim really well, being the first out of the Water.
Due to a really bad transition, I left the 25 seconds down onto the leader, because I just couldn´t get my wetsuit off, as the arm of the wetsuit couldn´t get over my watch, because the string to open up the wetsuit tangled up between them.
I rode the first round of 5 kilometers in the front until I got overtaken, by someone who left the transition right on my heels. He wasn´t much faster than me so I rode with him for the rest of the bike and we caught the leader just before T-2 entering the transition in Positon one and two.
My transition didn´t go exactly as planned, as I forgot to put the baby powder into my shoes and wasn´t able to enter them quickly, so I left the transition in the third position.
The leader pushed the pace and got a gap quickly, but I was able to overtake the guy, I rode with and ran by myself for most of the run. with about 400 meters to go a fast runner came by from behind and I had no chance at all to counter his attack so I have to be happy third.
My goal was to win the race, but the winner was three minutes faster than the winner last year and even the 7th athlete this year, was faster than him, so I´m very happy with third and a time, which is over two minutes faster than the winning time last year!
Priorität: B
Zeit: 54:27 (Gesamt 3.)
Splitzeiten:
Schwimmen: 6:09 (Erster aus dem Wasser)
Bike: 30:23 (Zweiter vom Rad)
Lauf: 17:55 (Dritter gesamt)
Datum: 24.08.2019
Startzeit: 10:45 Uhr
Disziplin: Triathlon
Distanz: 0,4 / 20 / 5
Ort: Oberschließheim
Webseite des Eventorganisators: http://www.3muc.com/
Ironman 70.3 Mallorca